A dream of Intuition 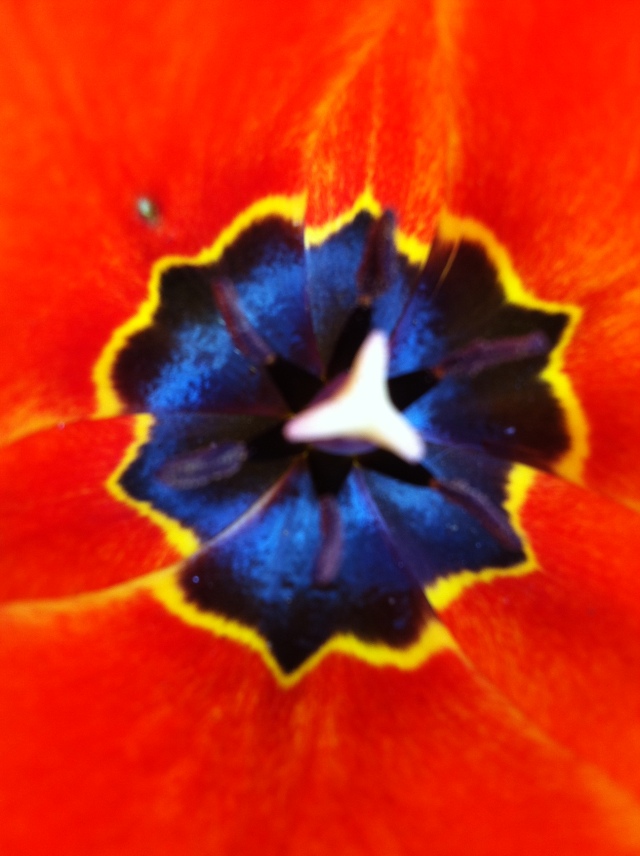 My jubilant tulip is reflecting blue in its shiney black.

I dreamed we went into a hotel with our toddler. We went to bed and when I woke up I realized what I had forgotten about our child and she is not with us. I have this devastated feeling of loss. Hours had passed, as we slept. I did not know where to start. 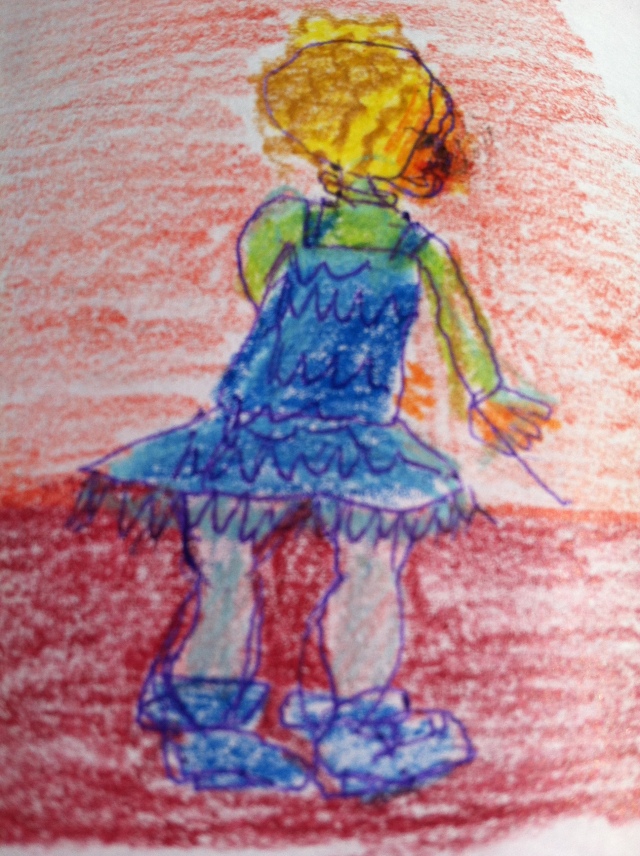 My father told a story of the temporary loss of his first child, when she was a toddler one evening in early Summer. She was with him as he milked the cow. She was ignored by the big red and white cows, who were rummaging into the hay for the sweetest bits of clover. She had dipped her fingers in the creamy froth at the top of the bucket of milk and sucked them clean, a right granted to all the children in the family. When he finished feeding calves and sending the cows back out to pasture for the night, he went up to the house with his bucket of milk for the house use. She was not there. My mother, who was heavily pregnant with a second child, had not seen her. He was startled to consider where she got to and a quick foray around the house and its surrounds did not find her. 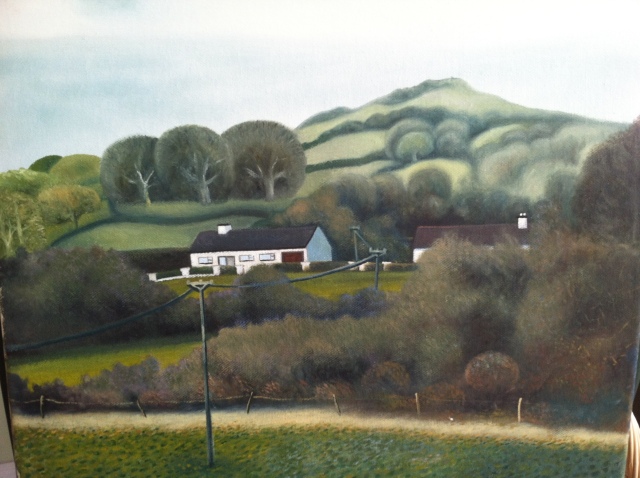 A painting of a view from the sand hill. The hill in the distance is Cnoc NaCosta. The artist is Mark Longworth, “Francie’s nephew.”

His intuition led him out to the field at the back of the house, a river on one margin and a bog on the other side of a formidable sand hill deposited there in the ice age. This hill, that covered ten acres or more has been opened into a safe sandpit, near the house and the place where the lambs played around its edges. He has brought her out there to see them earlier, in the summer sunset. Ten lambs raced along the higher ledge of green that was a foot higher than the sand. After a playful run, at a designated spot, the lambs leapt into the air, with there little tails wriggling, for a dance filled landing on the sand. Watching this repetition, this springtime ritual, many times, left her feeling jubilant and she cried when he brought her off to herd in the cows for the evening milking.

He stood there, where they and the lambs had tarried earlier. Now the sheep had moved into the lower ground of “Savages Garden” for the night and neither she nor the sheep were visible.

She had so enjoyed the lambs that she found her way back out there, under the tall pine trees, on the rutted lane, under the gate, to watch again their jubilant jumping. When she did not find them, she started to walk, across the hill, toward the big hedge cutting the field in two. Hazel nut trees, raspberry brambles, rabbit boroughs, sloe bushes, hawthorn trees and bird’s haunts were there.

When she got tired her little legs went down hill and she finally fell down in an small round indent, about ten feet across and no more then seven or eight inches at its deepest. This indent was in a natural valley, formed by the c shaped sand hill of the ice age. At the top of the hill there were three crosses, where lightening had struck three cows, some years earlier. She tried to protest her abandonment but she was full of creamy milk and was exhausted and was soon fast asleep.

When my father told this story, he was very proud of the fact that he followed the faintest cry that he heard when he first entered the field. It was as if his feet knew the way to his only child. He followed blindly in a fast walk, without thinking. As he got closer she woke up to his call, “Francie, Francie” but she did not know enough to cry out or reply, coming out of her sleepy fog.

His eyes were used to the darkness but he could not see her in the little indent, where she lay. But his intuition said, “go on, keep going” and he blindly went forward with nothing more than an inner knowing where he would find her. His fears, a swarm of angry bees were ignored. He detected the brightness of her pink clothes when he was right beside her and he dropped to his knees on to the grassy ground, all energy leaving him. She woke up to his touch as he scooped her up into his waiting embrace. 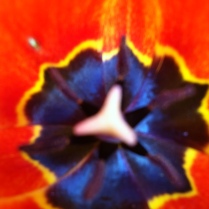 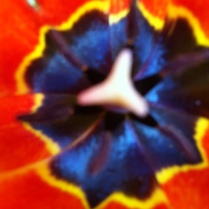 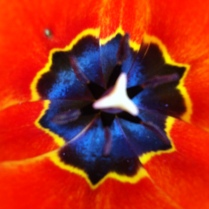 In love with this happening tulip

As I look into my dream above, about loosing my child, I have to consider that the child of intuition is my toddler and it is so easy to lose awareness of this incredible gift we have for knowing, when it is some particular knowing we need, whether it relates to health, or dreams or any of the possible seven thousand things in our particular world.

Rose, Don’t go back to sleep but grow your intuition, as the innocent child it is. Follow those leadings that will rescue that child again and again, even as that child of intuition will rescue you when most needed 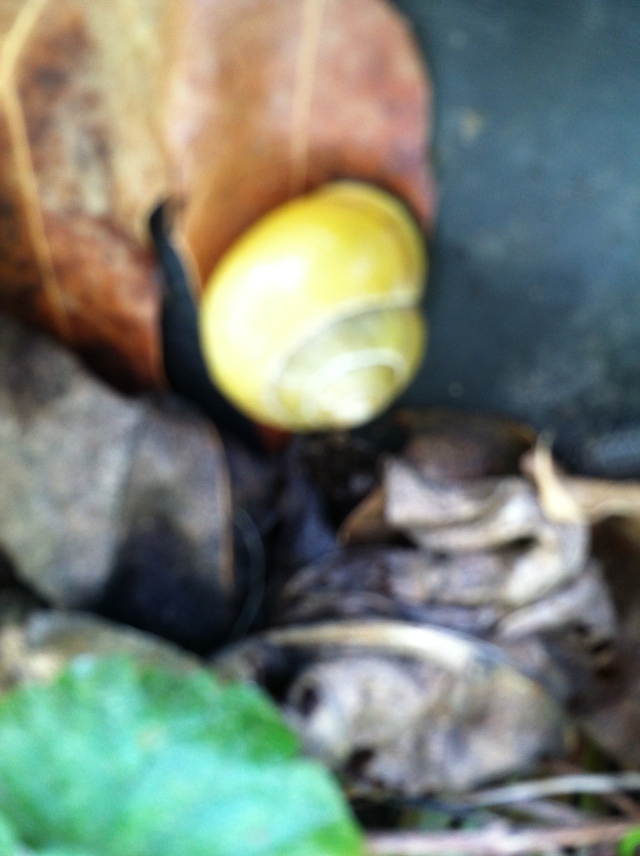 Other inhabitant in my garden.