Lost to each other

Uisneach and Mariah were having a difficult time with directions. He agreed to meet her at a certain place and then he saw her there. He did not like to call out and draw attention to himself and so she did not see him and slipped away among the trees, not seeing where he parked himself, so close behind her, he was. She was there one minute and gone the next. It was no time before they met up but getting over this vanishing, under his nose, challenged him and in his haste he felt obliged to blame the other. She insisted it was his fault, not communicating with her at the time he saw her. They went their separate ways until later. She was a little enraged and sat under a tree to cool off, reading something she found nearby in the trashcan, only a little soiled, about mindfulness written by the Rural Pen. There was a lot of talk about NOW and Now. She drank up her reading and her water and was glad to cool down from the hot sun, her little temper fit and her earlier exertions of getting there.

She sat down near the yarrow which is in bloom now

The next day they arranged to meet again in a favorite pace, in a different park. They had often walked there together, following the path of exercise stations. However when he got there she was nowhere to be seen. Her broomstick was there, unlocked, but not her. Was she abducted? He followed in the pathway around three times. He asked others if they had seen this person with grey hair, but nobody had. He thought of waiting with the broomstick but considered she had fallen and hurt herself and it was his duty to find her. Perhaps he should call for help. 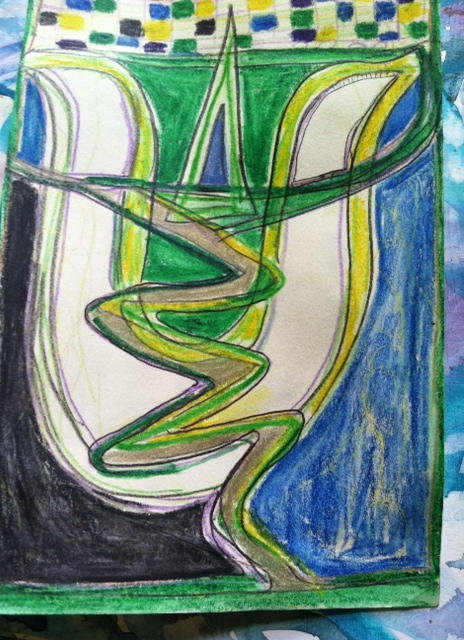 Their paths did not cross

On her part she had ambled around the exercising stations, slowly walking. She stopped at all the stations, following instructions of pushing on this iron and pulling on that, swinging up her legs and pushing herself up thirteen times and looking out for him all the time. When she realized she was spending all her time worrying about him she decided to concentrate on hanging upside down on the back exercise machine and to look at the soles of the shoes of those passing by, as their legs now upside down to her, flowed up and down in an opposite way. It amazed her how surreal it all looked, as a father and young daughter went by in unison of steps, observing the underside of their shoes as that showed itself to her in her position. He told his daughter that she was doing a back exercise, not realizing she was falling into the current of their movements as they went by. 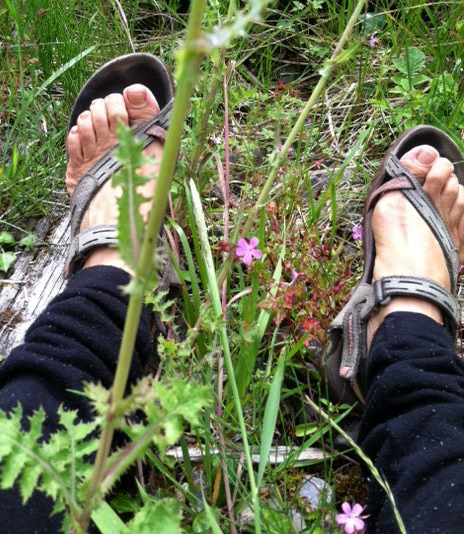 resting her feet in the park

She had good energy, her knees felt better, and she decided to include the old walking loop, where she had once observed a family of Pileated Woodpeckers fly across the path, low to the ground in front of her. She had a dream of this bird, earlier that week. They were a grand sight, as they flowed past her, mother and father and three young ones, black with flashes of white and red, in a dropping motion that is part of that family’s flying way. Another time, just before a snowstorm, she had watched the Pileated Woodpeckers walk up and drop down tree barks, as she stood still to see them, in this same area, getting in some good food to sustain them through the storm.

Her mother loved geraniums and so does she.

She found some water to drink, and in no hurry; she arrived back to see him set off in the direction of the beginning of the path. She called out to him and he asked her where she had been, for the last hour and a half. She could only laugh this time. She felt empower by having completed her exercises and just knew he was nearby, looking for her in his own way.

The energies that caused such mix-ups was broken up and they enjoyed a good evening together, with communication better than ever, and feelings expressed that pleased them both. They went to a local feast, sat at an evening outside fire there, and played a game of crowns. A perfect end to the day. The End.

The sky in Ireland

When Rose woke up the next morning, she remembered a dream about the sky and how some lovely little squares of sliver sparkled though the white clouds. The dream only came back to her as she looked to a beautiful blue sky with bands of white and shirring above that morning, as she started to go through the Qi Gong sequence of exercises, with Elizabeth Scott.

We all smile after QiGong in the morning

They both tried to stay mindful so they could pay attention to the flow of energy in and through the body as they moved this way and that. They confessed to each other about where their thoughts went, pulling them back time and again so that they might get the benefit from the chi they were pushing around to “strengthen and to sooth the meridians” and to notice the “jade dragon weaving around the body.” We never knew if we were doing it right but we always knew we were moving the energy, as we are both full of smiles at the end of it and in a great mood to do what needs to be done.

A door of light

I have decided to print up a Dreamer’s Way Booklet in the next week, so it is available to those who want to work with their dreams. If you have a dream about a black disk behind the mirror or some mirror like silver up in the clouds in the sky, be sure you are dealing with a little something that will benefit from attention. May your dreams have their way with you and bring you to the thoughts of your heart. Have a great beginning of the week. Love from Rose.