One time after my mother called the opening Rosary prayer “Our Lord, May You Open our Lips” to which the rest of us should say “Oh Lord Make haste to help us.” One of my sisters, then grown, said “That he may close our lips again.” This brought up a little titter of laughter from someone which was followed by fall on the ground laughter. My father who was kneeling agains the soft armchair tried to stay above it all but he gave way to the mirth filled room. It took some time before my mother succeeded in restarting the Rosary again.

Every day the Rosary to the Virgin Mary was said at our house and it was a tradition that went back into the forgotten past. There were nuns and priest in the family and a Bishop Plunkett was said to have been killed by Cromwell’s army at the square in Drogheda, while calling out the Rosary to his five thousand parishioners. They were not armed except by prayer. He was canonized fairly recently by the Catholic Church.

I routinely ask people about their spiritual efforts in the course of asking for dreams. A woman of christian orientation, told me of how she uses the “Hail Mary” mantra to calm herself when she takes her grown daughter to the airport to go to Europe. She would say the whole prayer “hundreds of times” as a way to relieve her anxiety and bless her daughter.

Plates given by “Moddy” to my parents at their wedding.

My great-grandmother “Moddy” said this “Hail Mary” mantra all her life in the form of Rosary. She was married to a Plunkett, closely related to above saint. She became crippled at the age of sixty from “rheumatism.” She sat at the sweet smelling turf fire with her rosary beads, in a small cottage in the midlands of Ireland for thirty years. She had her great grandchildren recite the rosary with her. They stood at her knee, included in the aura of her love and prayers. When she was on her deathbed, her two sons, priests, stood beside her bed and she told them the Virgin Mary was standing at the end of the bed, filled with light. The hair rose a little on their heads as they paid attention to her and told the story to the family afterwards. 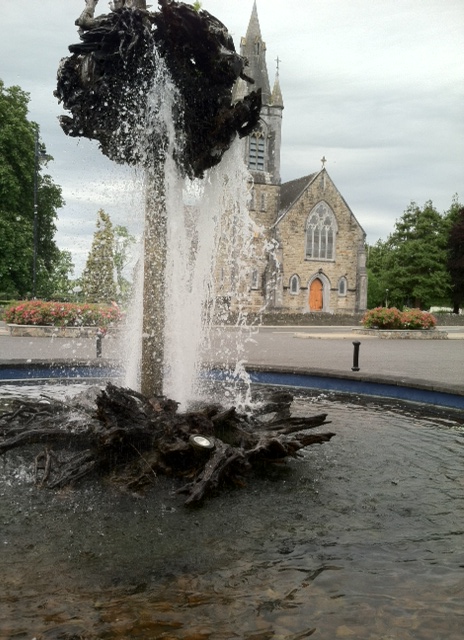 Church in Midlands in Ireland.

My sister Teresa, in England has a great devotion to Mary and prays the rosary every day, on her own or with her husband, who is a deacon in their church. She calls it the rosary walk, as they use the traditional call and response form of the prayer, while the walk together. She says the rosary is a great help to her when she had problems. She would stop and say a “decade” (ten Hail Mary’s) and after that she would be able to sort the problem out.

Teresa and Rose in Ireland recently

Mary, my sister, deceased, also had a great devotion to the Virgin Mary. She did some healing work and called on the Virgin for help when needed. After her death Mary communicated, via a dream, that Teresa’s devotion to Virgin Mary would benefit her family for generations to come.

Teresa found herself the care giver for my sister Mary twice in that last year of Mary’s life. Teresa told me that Mary told her of two apparitions she had of the Virgin Mary during her last illness. Mary was mobile still and went journeying to a retreat center in Glendalough in County Wicklow in Ireland, with Teresa. Afterwards they visited a pub, in Dublin, which had the delightful combination of food and music on offer, both of which Mary loved. This pub was also said to have been a church in the past. Mary told Teresa that she could see the Virgin in the glass. The Virgin Mary was holding out the “host” to her. Teresa got up to see better for herself, and reported not seeing the vision. Mary’s eyes were filled with tears.

A pub in Dublin with quotes from Oscar Wilde and Jonathan Swift.

The next time my sister Mary reported on a vision was at the home of her birth where she reported that my mother and her grandmother visited with her in spirit at the same time as the Virgin Mary came and gave her a “blue blanket.” The Virgin put the mantle around Mary and Mary reported on being greatly comforted by this.

A distant view of the top of the house.

I am now reciting this prayer in my meditaion for two reasons. The words include the womb, which is in the first chakra, sacrum area, which connects  the body with spirit. The aim is to fill that area with holiness and light.  And the words “Pray for us sinners” asks for help, for advice relating to spiritual know how. The Virgin Mary is known as the “Mother of God” and my mother went to the best and highest source for help. It brings a great peace to me, when felt through the body, as it is recited. My middle name is Marie, a derivation of the Mary name.

A representation of Virgin Mary

I went to a Yoga Festival(Samsara) in Luray this past weekend. I knew I was at the right festival when I got up early on Sunday Morning and sat in a nook on the Shenandoah River bank and did my meditation. The wide river did its magic with the sounds and with the flow so that I felt its waves go around and over me. It reminded me of Varanasi and the Ganges River where many come to the river to do cleansing and bathing rituals. I was invited in the course of this weekend to think of someone I did not know and to send peace to him or her. I thought of such a pilgrim at Varanasi doing ablutions and I sent him or her my prayers.

I am the one with my nose down and a white scarf on my head.

At the festival of lights in Vernasi, India

Rose is very happy in the River Bain in India

My prayer for you: May you go out into the dawn, before sunup, and get in contact with the circle of love in your heart.

May peace well up though you connecting your Solar Plexus and your Throat Chakra, joining the yellow and blue of them both.

May you dip deep to find patience in your second chakra, and may you open the door up to the violet heights of the crown chakra. 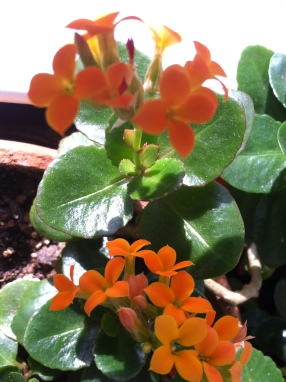 May you above all find understanding of all that comes your way and accept it as the boon it is, to the red circle of the sacrum and the indigo circle of Third Eye. 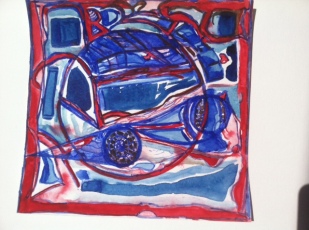 Love Peace Patience and Understanding be with you all for all that happens to you today.

Self portraits can be fun

May you work on your dreams and integrate them with your spiritual life and your body. I will be happy to be the go-between of that bridge from one to the other. Love Peace Patience and Understand be with you. Rose 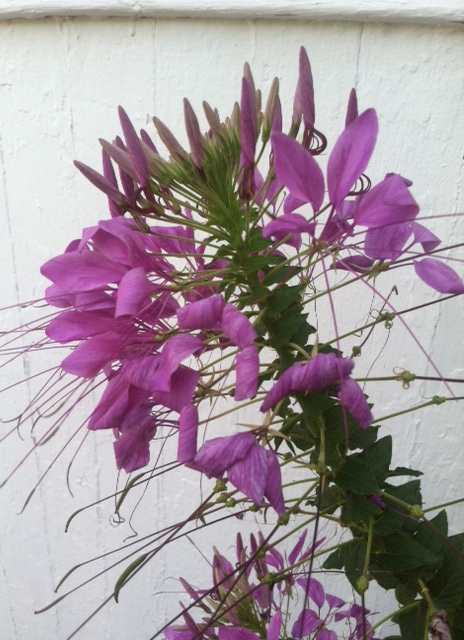