Gift of the Spirit 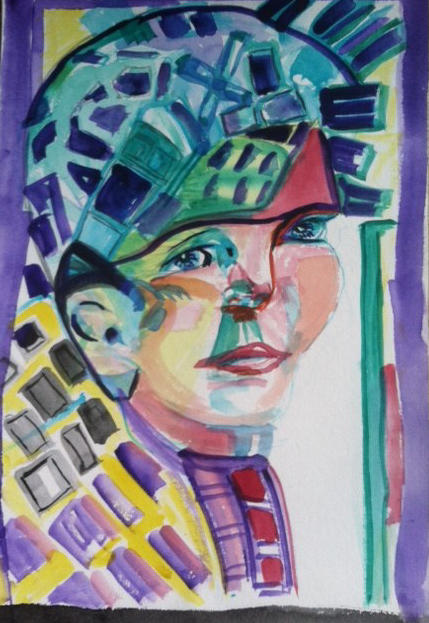 Dream Interpretation is Rose’s Gift of the Spirit

Recently Rose was asked what her Gift of the Spirit was and after making a long list, she wrote that it was “writing.” Others said many other things like, counseling, singing, drawing, painting, poetry, interpretation, dreams, mystic, prayer etc. It was only in hindsight did she realize that dreams are her gift of the Spirit. She was sucked into this avenue when she was about nineteen, when she heard a lecture about dreams and dream interpretation. The promise was that it would transform you, expanding the confines of ordinary reality, beyond the walls of space, time and our egos, springing free into what is next.

She was in Ireland at the time and she wrote out many dreams, without much understanding, and without having a mentor to help her with the dreams. Rose did attend a weekly dream group as part of “A Search For God”study group connected to Edgar Cayce’s work. Tea was served and dreams were pondered as sweet cake and sandwiches were consumed at the end of the meeting.  Good times, good times, as her friend Allison would say.

Allison Garcia is a writer of the book:  Vivir el Dream, an immigrant’s story. Her Gift of the Spirit is writing: http://a.co/tlopY5

She continued with group when she came to Richmond, Virginia that first year away from home sweet home. It was very helpful to be part of a group when she first arrived to join her husband. He was working 15 hours a day at times and the group members took pity on her, without a car, bringing her out to a local gym and meeting weekly for group. Pictures below taken in first year in Richmond, 1985.

In the late eighties after immigration, Rose acquired a computer and joined Atlantic University in Virginia Beach. Henry Reed PhD was her mentor then. She did seven of their courses on the Inner Life, Dreams, Meditation, Carl Jung and Transpersonal Counseling. She did some research and found out that dreams did not answer your questions about what to do, but took the trouble to let you know what you needed to know about your self next. She did a lecture here in Harrisonburg for her church group, as part of the course on Dreams, to get a grade of A on the Dreams course. She shared her research with the group.

Recent picture taken in New York by Frances Longworth. Family is all grown up now. Pictured are Annabeth (Musician) and Miriam (Writer) their Gifts of the Spirit.Miriam’s book is The Unbinding of Mary Read and is on Amazon coming out later this month. Annabeth is making music on Patreon. The McNamara Kids.

Later she started a group in Harrisonburg, where she raised family and spent the intervening years in the States until now. The group was dropped for various reasons while she attended James Madison University. While going through school, she never ceased to bring in the psychoanalytic. She liked to focus on literature that Carl Jung focused on and to write about that. This kept her dream work interest alive and learning more.

After she graduated from JMU she restarted the study group and the night after she had her first group she dreamed that she was now starting Collage again. She smiled. Dreams are connected to the college of life and living and will help her with that. With marital troubles she let the dream group drop again. She was two years into her Masters in Counseling by then. Her courses leaned into the psychoanalytic, and gave her new interest in dream interpretation,  with focus on art, art therapy, sand tray and dreams fitting into her work.

Looking Inward is a Gift of the Spirit

When Rose immigrated to USA in 1985 she was travelling alone with an eighteen-month-old toddler. She decided to content herself with bringing one big suitcase and leaving the dream books behind, which amounted to about five or six.

Rose at work as seen by a client

She filled many book over the intervening years with dreams and visions as she studied more of Carl Jung. She still has a remnant  of these dreams connected to her counseling mentor. She went to see her monthly.  Rose travelled three hours to see her.  They both drank strong sweet tea and sat for three hours going over dreams and mandala. 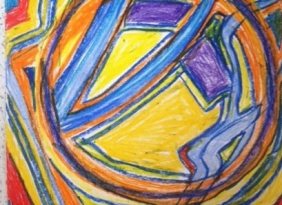 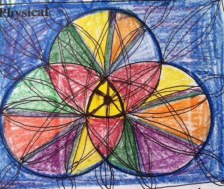 And as Rose feels her mission and passion is to work with dreams, she goes where no woman usually goes with dreams. The more she goes with them the easier it gets as there is a little of the psychic, a little of the intuitive enlightening her as she goes. She is often stumped by her own dreams but if she speaks of them and works the dream leaflet over them she gets there with them too. She does not have a gardener to talk to about them but she has you. Times in silence often bring her to a new understanding especially when completed in the dawn hours of the morning.  Mystics and Yogis always got up early to pray and meditate at dawn.

The dream of the stones beating me

An unexpected appointment was made with me for this morning and the bearer of about four dreams came ready to work. There were images of a crone, which he helped, of climbing over impossible barriers, of climbing up to top of a hill to check where the water was coming from etc. We considered it all from many angles and as our unconscious was listening to us all the time, I am sure we will get feedback through our dreams when next time we catch them. You too can contact me and start your work with dreams. Everyone dreams but not everyone awakens. This is your life and your dreams and within that looking within, you can awaken to greater awareness and love.  Call me unexpectedly. I love my work. Love from Rose.

Meditating in the early hours just after sunrise.

1 Response to Gift of the Spirit