Dreams and Meditation at Beach 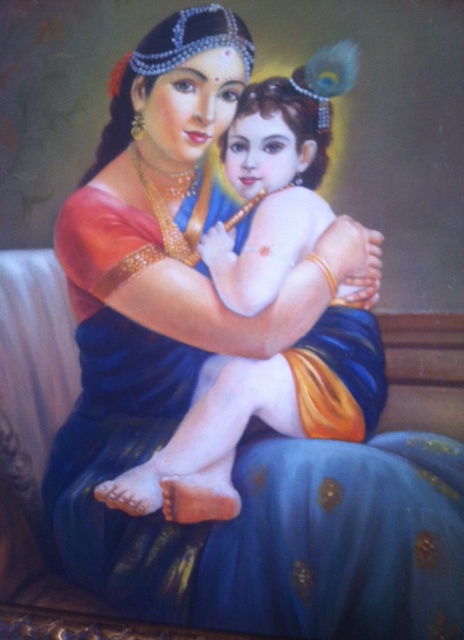 In the Meditation Room of ARE

Rose went to the meditation room on the third floor, of the Association for Research and Enlightenment on three of the days she was at Virginia Beach,  There is a huge new crystal in the back corner of the room. She decided to sit right in the middle of the room, to get the benefit of what ever passed between the Crystal and the Amethyst in the opposite corner. 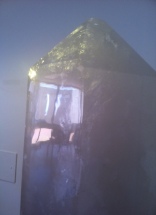 From where the man came 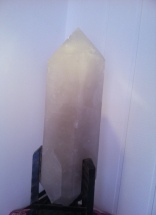 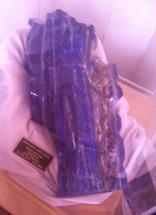 The ocean is out front in the distance. She once dreamed there is a lot of water deep beneath the building. She hoped that the stones, lapis, crystal, amethyst and the water beneath the building and the huge ocean out front, connecting her with Ireland, would supply some extra energy there. Music was played and it was overlaid with bird song, which has a comforting effect. When birds are happy we can be sure there is no threat around.

Pictures from the back wall of the Meditation Room

The woman who led the meditation said an affirmation when the music stopped after ten minutes. A man left once during the time near the beginning. He had been on his phone earlier. Rose felt a little hostile but quickly went back to the silence in hand. He returned and was very still after that. The leader said a prayer of protection for us all from the Christ. There are large paintings at the back of the room representing some of the major religions. 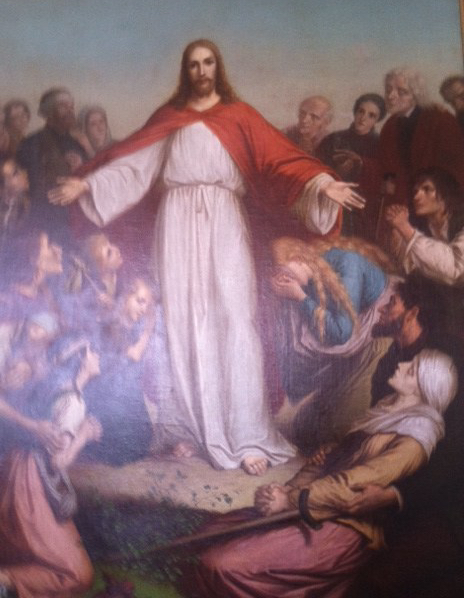 Painting from back of Meditation Room at ARE

Buddha, Jesus, Abraham, and Hindu are represented Rose thinks, maybe others. The meditation leader had a list of people to pray/ send the light to (people who requested prayer)/ put the light around(people we are concerned about.) A number of other general requests for those who have no one to pray for them, for the leaders of nations and those recently deceased were mentioned. And finally all were directed to pray for the earth, which Rose was happy to do. When the meditation leader mentions the oneness of us all in the room, Rose felt that oneness. She felt she passed out of herself into that oneness of the infinite for a second. 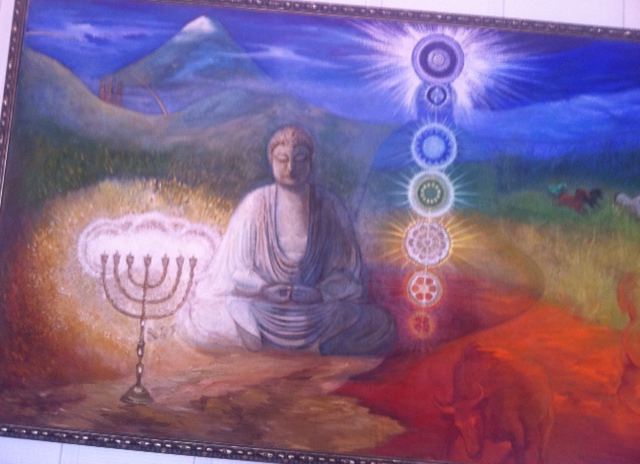 Buddha, the Seven Chakras and the Jewish Religion represented

Rose has a song about oneness “All is One, One is All…. There is only one.” And this week she made up another about “Om Mani Padma Om, Children of the Law of One.” She feels that we have to consider everyone, everyone under the one Law, of Love. 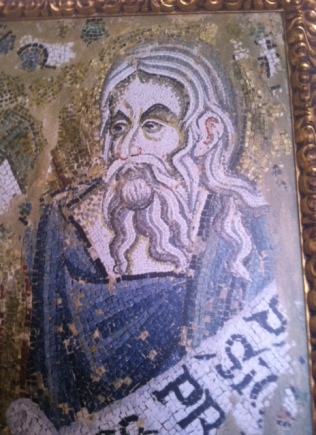 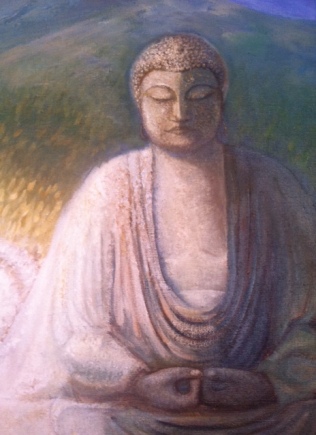 Rose went about collecting dreams again and she had another dream from a visitor to the beach from Tennessee. It was about children playing. She told Rose her dream as she sat in the Association for Research and Enlightenment Garden of Prayer and Meditation. There is a waterfall there and benches to sit on. The image of playing with children is a positive energy in the dream. 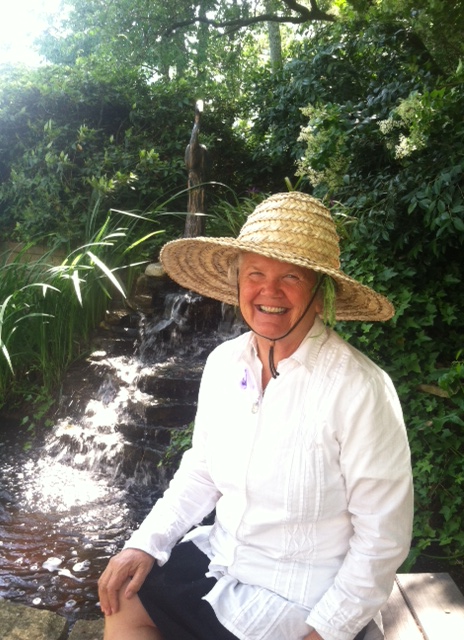 Rose asked her about her spiritual path and she said that after she moved and then built a house, she lost her practice of recording her dreams and meditation. Rose considers such practice a spiritual effort to get to know where you are with your God and Spiritual Path. Now the dreamer finds herself at the beach and getting books about the spiritual path and she is interested again and so Rose thinks that is why the symbol of the children comes in again. 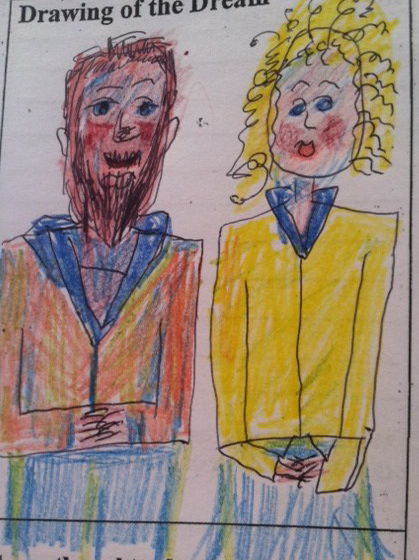 A representation of the Animus, from a woman’s dream. She is not connected to her inner male energies and may need to be grounded as their lower half is not in picture.

Then the dreamer volunteered she dreamed she was kissing an old boyfriend. Rose though that was a sign that some masculine energy is coming forward and she is getting close to the energy and it will help her find her way spiritually. Again the dream does not tell her what to do with the kissing dream image, just that the masculine energies, the Animus, is active and will be helpful to her as she takes on her task of finding her way on her spiritual path. All of this has to be taken lightly as Rose only spoke to her for a short time. She left Rose carrying her new books, to help her on her spiritual path.

Another dream given to Rose was from a young woman who dreamed of some busy ghosts, who had to work hard to scare people up every hour on the hour. Rose did not understand it at first but then as she paused, as she went down stairs, she knew what it was about. The young woman had just started a job. She did not fully understand their mission, their intent yet and was a little afraid. People had appointments there on the hour. She had not looked into what it was all about. Then her rational mind made her feel that she had to work hard in this place of the unknown (ghosts) for her. I thought this a little funny in the aftermath. She said at the beginning of her dream tale that “I had a funny dream.” Sometimes the unconscious can use a bit of humor in all of this if we look for it. Dreams are so individual that what is significant for one person may not at all apply to another. 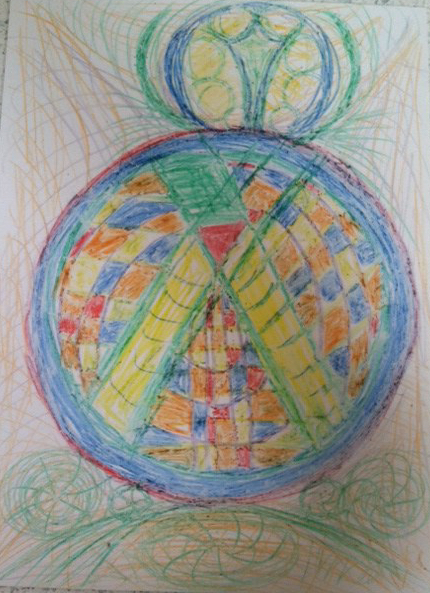 Recent Mandala. This was completed without paying much attention to it.

I am back in the Burg ready to work with you and your dreams. Be sure to contact me if you want to go a little deeper into your own energies, your own spiritual path, your own dreams. I look forward to hearing from you. Love from Rose.