So when Mariah found herself tightly connected to Leprechaun Roisin Dubh through her thoughts, she was not happy with this constricting feeling she was having every time she thought her thoughts. She had quiet unhappy thoughts, thoughts coming in as a frumpy frog, coming to visit her through the door of her mind.

The toad and how Mariah saw him

In fact she thought she heard a knock on the door, but when she looked straight out, there was no one there. But a big grey green toad hopped passed her before she could slam the door shut. He almost tripped over her foot but recovered himself in his jump forward. He made his way to the opening over the stream the house straddled and disappeared down there. She wished he would stay away from her water source. Mariah mumbled about manipulation and her feathers were ruffled with the frog. She thought she heard a laugh coming up from the household watering hole. 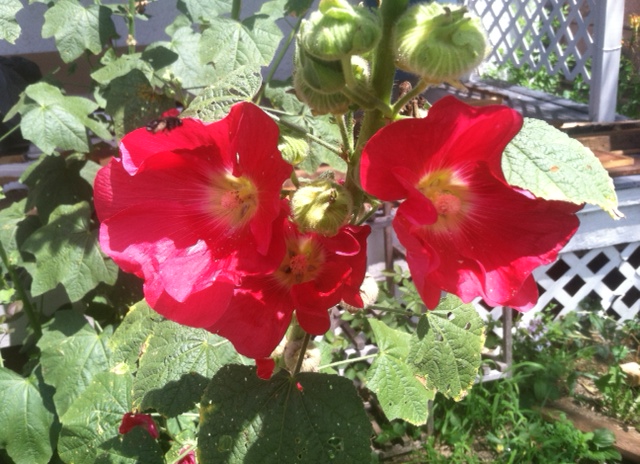 Hollyhocks are in bloom in the neighborhood.

She had been airing her grievances to any and all who would talk to her, any and all unsuspecting friends from whom she wanted affirmation. There was no straight and narrow lane here for her. The broad and fiery street of complaint seemed easiest, default mode.

She could not get away from her own self and her thoughts and her need to air them. It was a good story and everyone would see it from her angle and agree. If they did not she would go over it from another angle and get an investment from others sooner or later in her affairs. Even the hens had to listen to her. She worried about what kind of eggs they would produce. Perhaps they would stop laying altogether. She had stopped laughing.

And when not airing the thoughts to others, she took a hold of those thoughts and buried them in her gut, a place to grow things, a place of incubation achieved by looking at the grievance from every angle, watering it with tears and with emotions, spinning it one way and then the other. She warmed them with her intense looking, like shining a sun on them and setting them to growing. That looking from every angle brought energy to them and multiplied them in her darkness like a cancer.  They were becoming a forest of frightening weeds ready to choke her at any minute. She knew she was backing up the wrong weed but felt powerless to do anything about it. Those weeds invaded her meditation and prayer times too.

Rose’s painting of Hollyhocks completed some years ago with Margot Bergman as teacher. She grew hollyhocks at her hose. We painted there for a week.

So after a great loss of time thinking about all this, Mariah sat into a lonely ditch, suitable for a rest, with her dour outlook, her dark thoughts and her even darker feeling. She felt she might be on her own Aegean stable of roots, created by her personality over the last fifty plus years. She was growing some seeds and they were not of love. More likely the tares and thistles of the ditches in her mind, were growing long and winding roots, connecting to other roots. Maybe she might suffocate in the here and now of the ditch of her own making.

She saw the Druid coming in her direction. The baby hedgehogs were now more grown and were still following him, stopping to forage and running to catch up with him.  He was like a little conductor with a hazel wand in his hand talking to them. A bird of two also seemed to be accompanying him. A rush of affection came over her as he came nearer to her. She thought of kissing his feet. She restrained herself. 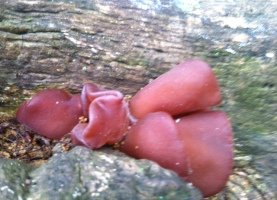 Whirls were growing not the old tree trunk

The hedgehogs thought his story was funny.

Thank God he is here, she said, even as she also thought she might hide her complaints from him. When he looked directly into her eyes with his piercing blue ones and asked how she was really doing, she spilled the porridge of her held in heap, out in front of him on the lane. He made a few marks on the mud with his hazel wand and made note of her confession. He set out that she was part of this group because they always reincarnated together. They married each other, they made promises,  they had problems, they loved each other and because she had some karma with them.  Sometimes they did not want to face these problems from the past, He was putting his own angle on her whole affair.

Past life whippings, a ship-master in the Mediterranean, a less than kind caretaker were all depicted in the mud. A quick laugh was not the right reaction but it escaped her as she adjusted and balanced against the current pain. It brought awareness to the pain of not getting her own way, the pain of being blocked. She was not keen on walking in the shoes of her past lives. His little pictographs caused her to stared and the scenes that went before her eyes were of her sins from other times. To be continued soon …. 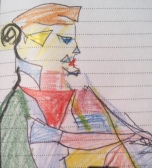 Getting on a boat to visit Lough Ree

Rose continues to work with her body issues. It is the morning and she is sitting very comfortable on her hips and with little notice needed of her body needs. She is reading of ways to use the imagination to work with imagining what the pain needs. Being a little child about it is part of the exercise, as in do what ever occurs to you, what ever you intuit.  She can keep the faith in this asking for healing. Spending time in the body at night, going into the painful area is good. This is not just thinking about it in the head. Go in there, see what you find and watch the area of pain change. The imagination has to do something about what it sees in there, especially if it is red etc.

And if you have frogs knocking on your dreams be sure to call me, IM me, or otherwise contact me through this site. I look forward to hearing from you. Love from Rose.

Rose’s painting of Hollyhocks completed some years ago with Margot Bergman as teacher. She grew hollyhocks at her hose. We painted there for a week.