Mary is delightful and joyful and loving

Mary in 2014  enjoying Macy’s window. We did not see the writing on the window behind us. “But what is real.”

It is three years ago today that my youngest sister died in Ireland. I wrote about her then and have added some new pictures now to honor her passing. It does not seem possible that she is already gone three years. Each year at this time there is a little more letting go. May she rest in peace.

In January 2015 the hearse with Mary’s coffin went down the avenue past the field with the horses, past the middle gate and an unsure fence of low stones and doubtful mending. The hearse was the engine of our train of cars filled with mourners, following her.

On the day of the funeral, after all the sweets were eaten and sweet things were said, a sweet thing happened, when that herd of horses found their way through that broken fence on the avenue, up to the house, standing on the hill. 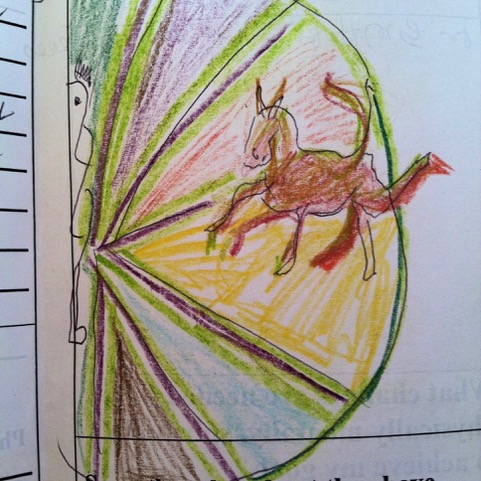 A red stallion, followed by mares and foals and other horses, led them. They galloped in unison, passed the grievers now gathered in front of the house. The horse’s hooves sinking in the rain soaked lawn, deep enough for pots of flowers to be settled in, were a magnificent sight as they towered above me galloping past. I could almost see Mary riding on the lead horse, shouting, “Look, I am free now,” her long curly brown hair restored and flowing out behind her in the gallop away from us. Amid outstretched arms, shouts and phone calls, the horses left as a train down the avenue, galloping, close together, on that lovely mild evening, sun setting.

Center of the poppy

The young family, whose charges those horses were, arrived with cars and two young boys. Without fear they set about getting the horses, back into there field, to have them jump over the stones and fence back into their plowed up field. 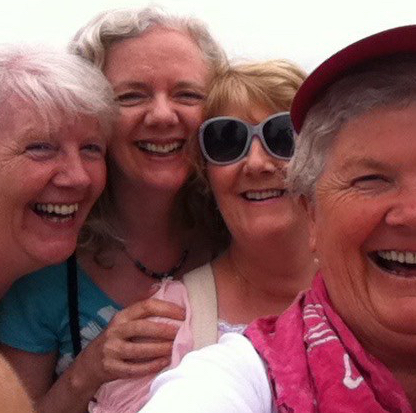 Left to right is Teresa Wells, Mary Longworth, Rita Nelson and Rose Longworth. All Walking On another avenue.

The wild red stallion was the last, but he did not leap over, in spite of fearless encouragement with shouts and arms waving and slapping sounds. The young boys were called on to stop the stallion as he broke away by the side of the jeep, the boy jumping out of his way. The father shouted the stallion was  “blind in one eye” repeatedly.

Walking on the avenue near the road gate. Mary is front and center.

The stallion was corralled at the road gate. In the gathering dusk, only the stallion’s head showed over the hedge, cut straight and tight for the funeral.

The avenue as it intersects the road at the top of the picture.

Meeting the young boys, whose great grandfather was brother to my grandfather, was the other great pleasure of the evening. To see the family likeness in the round faces and beautiful eyes, to hear their feelings of pleasure and fear mixed, to see them wait in a lighted car for their parents as they talked and laughed together. 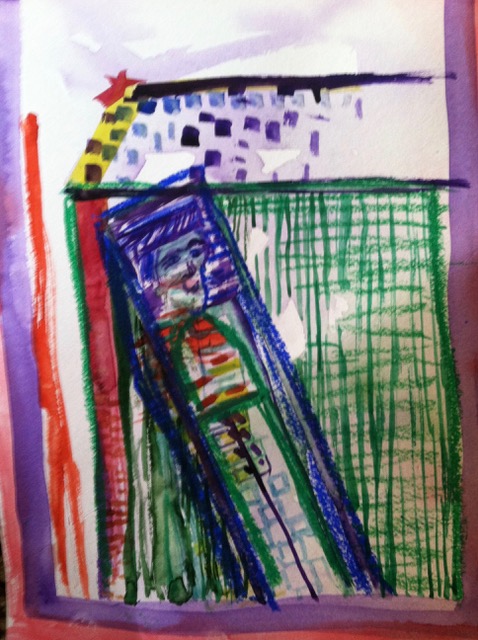 This field once changed hands into those of my grandmother’s family at her wedding but the untimely death of her husband, danced it back, and it went back and forth a few more times and now it is back with the original family after a recent sale. It lies beside the avenue that took my grandfather out in his hearse, horses pulling his carriage, a flu victim, in 1917. My grandmother, his wife, and my mother and father also went out this avenue after death and now my sister Mary. May I manage to remember my destination also and have delight and joy in life, as that magnificent red of the poppy leaf gives me delight and joy.

I wrote the following poem in school a few years ago.(Below: Mary’s headstone in Rosemount graveyard in Co. Westmeath, Ireland.) 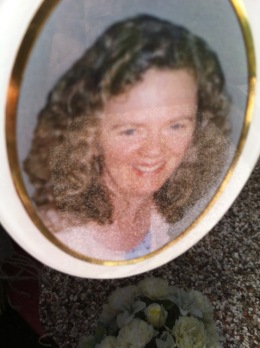 Invasive, flare along the banks,

Fifty years hence, the seeds over our heads

The hearse lit up by the bright poppy

Some shriveled, some swollen by sunshine 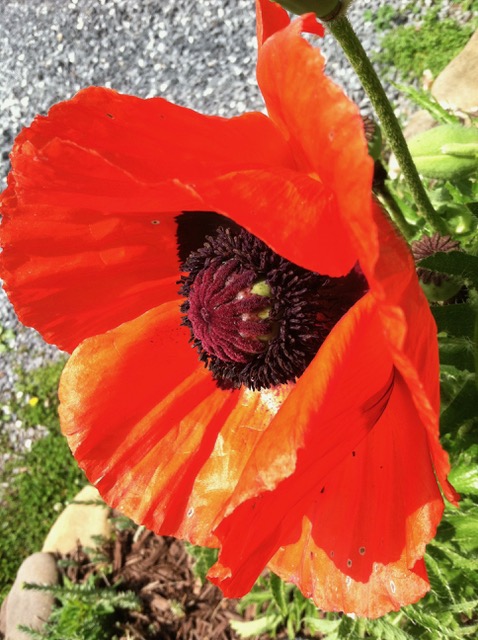 Dreams of Mary: Mary was concerned with her soul while on this earth. We see Mary in our dreams and she tells us love is the only thing that is important. She says in the dream that she is now only concerned with love, where she is, and that we should take mind, as this little earth is the best place in the universe to practice such a virtue. Love from Rose 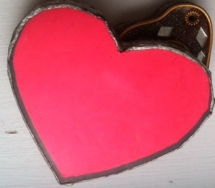 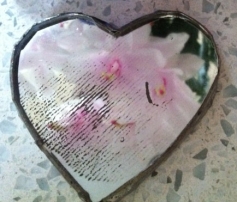 Meditation candle burning down and giving off a sweet glow in the half light.

3 Responses to Mary is delightful and joyful and loving