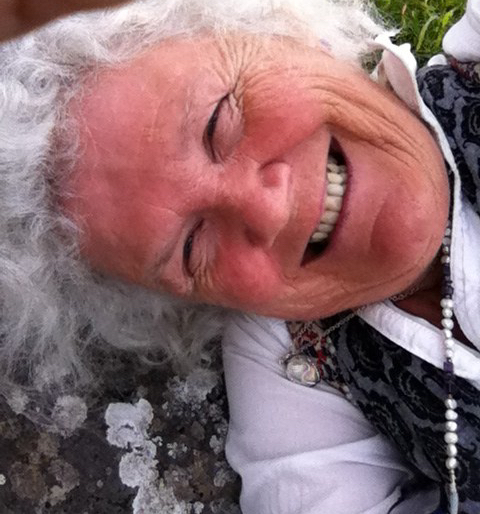 Rose Soaking up holiness from the stones in Clonmacnoise

I had a high time feasting on the best of foods, prepared by Nora, my brother’s wife, while in Ireland. My brother noted how unselfish she is and I agreed with him. Her food does a body good when eaten up, regardless of the ingredients and calories. I gathered nettles and dandelion leaves and ate them cooked in vegetable soups and the women folk there seemed to enjoy that too. There were fresh hen’s eggs to be had also for baking the cakes and for breakfast. And I ran my hands and knees into bunches of nettles for the healing effects on my little digits and my knobby knees. It was something my mother did regularly to keep her fingers in fine shape. 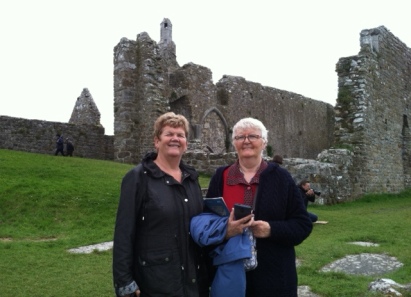 In Clonmacnoise with the sisters

Celine is a tower of strength too

Besides the medicinal and culinary delights, I also took pictures of castles and stain glass and especially enjoyed visiting Clonmacnoise, an early Christian settlement. I lay on the ground soaking up the holiness. My lovely older sisters were not in favor of getting near the river itself in case I jumped in and delayed everything and or embarrassed them, or drowned while in their loving care.

I remember being here with my mother in her later years and going down to the dock on the water. A tall man with blonde hair and German accent came down from a cruiser, with a kitchen chair and set it at the end of the dock so mother could sit and see the river from this perfect position, about fifty feet out into the water. Seeing the white boats come around the bend in the river was a lovely sight. The river itself drains the bogs of the midlands and is slightly brown. It has a clensing and medicinal effect on the swimmer.

On that last occasion I was there with her, we both walked uphill away from the river and lay down in the field, only to find a herd of lovely cows standing over us, to investigate and surround us in a complete circle. My mother had her own language with the cows and probably thought they were closely related to the Holy Indian Cow, and that they were caring for her and blessing her. I let her handle them as I went away toward the gate.

I was interested in the seven church ruins at Clonmacnoise. I wondered if they are related to the seven chakras, energy centers in the body. There were seven stones in one church. I think that both, churches and stones, are touchstones, with their own powers to shift energy through the energy they emanate. Having lay there for hundreds of years, often in the presence of holy monks, determined to talk with God, they are surely loaded with an ability to bring holiness to those who pause long enough to consider their worth. It also brings to mind the seven churches in Reverations which are also connected to the seven spiritual centers in our bodies.

The seven stones which were in one church 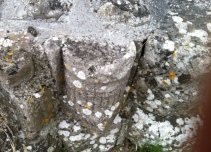 And on that stone a new name given 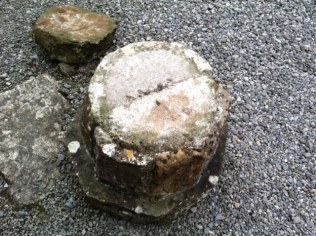 Some doorways were ornate and going through these doorways would change the energy field of the person going under their mantle. Leaving down something before entering, is a given, whether there is awareness of this or not. That these were used by these monks so long ago, with such passion, enough passion to build seven churches together in one site, brings me an excitement and I never leave Ireland without increasing my attachment to this site.

I will make you a pillar

There are three towers on this site. One of the towers, behind me below, is at the highest point overlooking the river and may be related to the highest chakra.

Celine is a tower of strength too

Rose under the biggest tower

A few years ago, I dreamed these towers were connected to music and singing. That ancient knowledge of sound taking down the wall of Jericho comes to mind. In my dream huge sounds came out of the stones as I levitated with it. It had the heft of organ playing and many voices. What old knowledge is held in the stones scattered there among unknowing visitors, coming here on narrow roads to feel something of that levitation? I just want to go back and ask again for the opening into what the monks were after, knew what was there. That the chief abbot is depicted with a flute to his lips and was called the chief singer also got my attention.

The next day we visited another site; much more ancient and I had a dream following that visit. I will be writing again soon.

I worked through a Dream Leaflet this morning.These are some of the considerations that came to me.

I am in a pattern of what I care about. Do I only care about being in control or does it go deeper into controlling myself into caring for others. I care for those who come to me, to bless them on an individual basis. I am able to deal with whatever conflict that comes to me, what ever urge to control comes my way in selfishness and ego, a way to meet myself and to smooth down again with breathing and with mediation and to be often in prayer for myself and others and to face into the caring for the soul of others which in turns cares for mine.

The lovely cactus is still blooming

And if you would like to start considering feedback from your own unconscious, from your dreams, be sure to contact me and we can arrange a way to work with you. I work through skipe, phone or an individual session in Harrisonburg, Virginia. I look forward to caring for you.

My role will be as a mentor to you on your journey. You will benefit from someone who has an active spiritual life and works with herself, her inner life. I am also a Licensed Professional Counsellor. May you consider going under that marvelous archway though which you find your true self. Love from Rose.

5 Responses to Clonmacnoise in Ireland